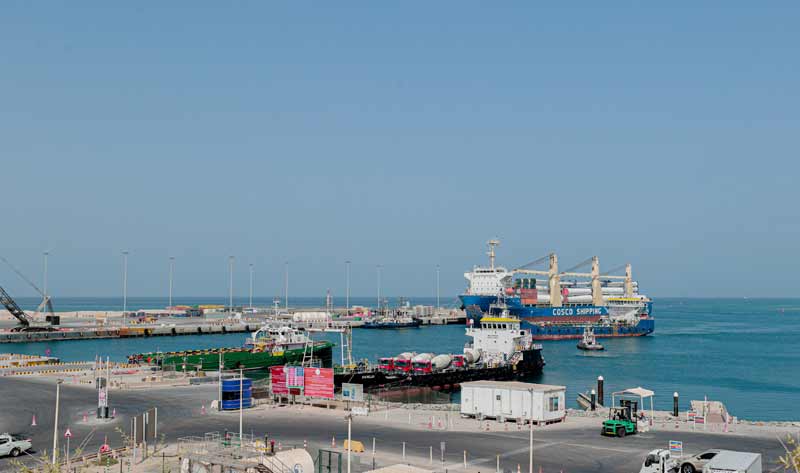 Abu Dhabi, UAE – 29 September 2022: AD Ports Group, the leading facilitator of global trade, logistics, and industry, today announced the arrival of the first international shipment at Mugharraq Port, one of the high-performing ports located within the Al Dhafra Region.

This is the first shipment since Mugharraq Port was recognised as an international port facility under the provision of the International Code for the Security of Ships and of Port Facilities (ISPS Code) by the UAE’s Ministry of Energy and Infrastructure.

International recognition was achieved after a series of major upgrades at the port, including the extension of the quay wall up to 480 metres with additional berths, deepening of the facility’s depth to 8 metres, as well as the development of additional Ro-Ro ramps.

Mugharraq Port’s enhancements, coupled with its strategic proximity to Ruwais, Hail, Ghasha, and other key upstream oil and gas projects in the region, further solidify its position as an ISPS port well-equipped to meet the evolving need of international operations.

The port has long served as a leading maritime facility, offering a host of offshore, oil and gas, general cargo, logistics support, bulk, and break-bulk handling services. It connects nearby Delma Island via RoRo and ferry services. Ongoing extension work at the port, as well as the new international port certification, will support the wider long-term development plan for the Al Dhafra region.

Saif Al Mazrouei, Chief Executive Officer, Ports Cluster, AD Ports Group, said: “The arrival of our first international shipment is a significant milestone for the expansion of new international business opportunities and will enhance Abu Dhabi’s position as a global trade hub. The recognition of Mugharraq Port as an international port will provide significant support to development within the Al Dhafra region, and also enable the creation of new trade routes connecting the UAE to the world”

Mubarak Al Mazrouei, Acting Managing Director, Mussafah Port and Al Dhafra Region, AD Ports Group, said, “It is our great pleasure to welcome the first international shipment at Mugharraq Port, a testament to our commitment to the ongoing development in the Al Dhafra region – catering to both commercial and recreational maritime activities. Our international certification will support the development of Mugharraq Port's logistical capabilities, especially in the global energy market, while supporting AD Ports Group's aspirations to position the port as a key player in global trade.”